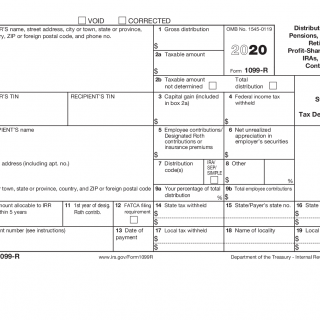 The 1099-R form is one of the forms in the 1099 series known as information return. These forms are used to report on the various types of income that a person can receive other than wages, such as income from independent contractors, interest and dividends, government payments, and more.

According to the IRS, a payee who receives any of the following distributions of $ 10 or more from the accounts listed below must complete form 1099-R:

On the other hand, a person who received form 1099-R by mistake should immediately contact the plan custodian to correct the situation and avoid filing an incorrect tax return. Like most 1099s, forms 1099-R must be sent to recipients by January 31 of the year following the tax year.

If you get 1099-R, keep in mind that not all distributions from pension or deferred taxes are taxable. The direct transition from a 401 (k) plan to an IRA is one example. If you are not sure whether the distribution is taxable, we recommend that you consult a tax professional.

Anyone who receives a 1099-R must enter the amount shown on it in their tax return and pay the relevant taxes.

The form is provided by the plan Issuer, who must provide a copy to the IRS, the recipient of the mailing list, and the recipient's state, city, or local tax Department. As with other IRS forms, form 1099-R must also include the payer's name, address, phone number, and taxpayer identification number (TIN). It must also have the recipient's name, address, and taxpayer identification number, which for most individual taxpayers is listed in their social security number.

The 1099-R form uses various numbered and letter codes to indicate the type of distribution. They are entered in column 7 of the form. The code table is included in the instructions.

Most benefits that are paid before the taxpayer reaches the age of 59 1/2 are considered early payments. An additional 10 percent Federal tax is imposed on early distributions to discourage misuse of pension funds. In addition, some States also impose state penalties on these early distributions. The additional tax is applied to the entire taxable amount of the distribution, unless an exception is applied.

Some common exceptions include: disability, death, IRS collection, and medical expenses exceeding 10 percent of the taxpayer's adjusted gross income (AGI) for 2019. This percentage is 7.5 percent of the AGI for tax years 2017 and 2018. An exception is also found if payments are made to an alternative recipient under a qualified family relationship (divorce) order.