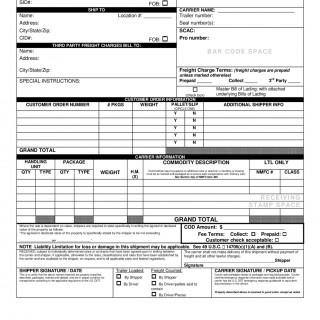 A Bill of Lading is a document of title, written receipt issued by a carrier, a transport company, that it has taken possession and received a item of property and usually also confirming the details of delivery (such as method, time, place or to whom), and serves as the carrier's title for the purpose of transportation.

A Bill of Lading serves as evidence for a contract of affreightment. This usually arises when a ship owner, or other person authorized to act on his behalf employs his vessel as a general ship by advertising that he is willing to accept cargo from people for a particular voyage.

Every bill of lading in the hands of a consignee or endorsee for valuable consideration, representing goods to have been shipped on board a vessel or train, is conclusive evidence of the shipment as against the master or other person signing the bill of lading, notwithstanding that the goods or some part thereof may not have been shipped, unless the holder of the bill of lading has actual notice, at the time of receiving it, that the goods had not in fact been laden on board, or unless the bill of lading has a stipulation to the contrary, but the master or other person so signing may exonerate himself in respect of such misrepresentation by showing that it was caused without any default on his part, and wholly by the fault of the shipper or of the holder, or of some person under whom the holder claims.

In addition to acknowledging the receipt of goods, a bill of lading indicates the particular vessel on which the goods have been placed, their intended destination, and the terms for transporting the shipment to its final destination.

The following are the different types of bills of lading:

An ocean Bill of Lading is a document that provides terms between an exporter and international carrier for the shipment of goods to a foreign location overseas.

A through bill of lading is a contract that covers the specific terms agreed to by a shipper and carrier. This document covers the domestic and international transportation of export merchandise. It provides the details of the agreed upon transportation between specific locations for a set monetary amount.