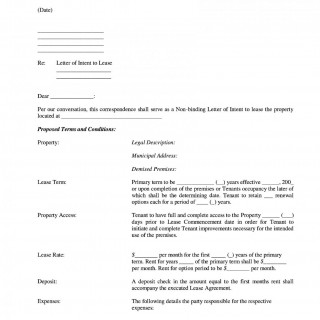 Before starting of direct negotiations on lease, many landlords and potential tenants will execute a letter of intent setting forth wishes and expectations. These negotiations can be an enlightening process on both sides. Some basic definitions and understandings should be included for clarity in letters of intent - LOI. Consider it a way to avoid nasty surprises later. Create a paragraph for each section below, and include a signature line for all parties at the end.

After lessor, the lessee, and their respective advisors have negotiated the basic terms, a letter of intent may be produced (usually by the lessor's broker with input from the lessor's attorney) from the RFP, the initial response to it, and the following series of successive proposals and counter-proposals. Sometimes the letter of intent will simply comprise the various pieces of correspondence and will not be physically combined into one document.

The lease letter of intent sets forth the mutual understanding of the parties with respect to significant aspects of the tenancy, such as the rent payable, options to renew and expand, alterations to be made by the lessor and/or the lessee, and the lessee's subleasing and assignment rights. The letter of intent is usually executed by the lessor and the lessee, but may instead be executed by their respective brokers. It is generally a precursor to the drafting of the lease.

Sometimes while the basic terms are being negotiated, the prospective lessor will provide (usually only at the lessee's request, at this stage) the prospective lessee with a copy of its "standard" lease form for the building (without yet customizing it to reflect the particular terms of the tenancy then being negotiated), so that the lessee may reduce the time it takes to subsequently review and respond to the first draft, when produced, and also so that the lessee may raise earlier rather than later, matters that fail to meet its expectations and other issues which may occur to the reader upon its review.