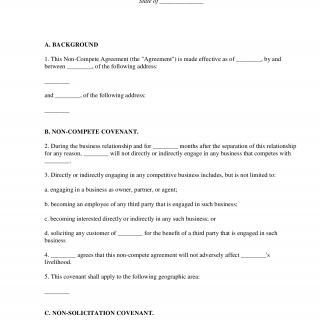 A Non-Compete Agreement is a document used to protect employers from partners, employees, contractors, and others who have access to their business secrets and practices using this access to leave a company and start their own competing business in the same industry. Non-competitive agreements are most often used in highly competitive industries such as technology development, sales, and marketing.

Common situations that require the use of a non-competitive agreement include the following:

An agreement is usually made at the end of a business relationship, but can also be created at the beginning of a business relationship as a condition of employment. In exchange for entering into an Agreement, the non-competitive party must receive some form of compensation, known as compensation. Consideration may be either a promise of employment or monetary compensation to be paid by the protected party to a non-competitive party.

How to use Non-Compete Agreement